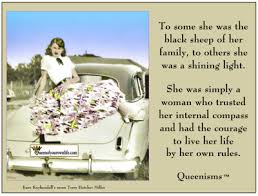 The so-called ‘Black Sheep’ of the family are, in fact, seekers of liberation roads for the family tree. Those members of the tree who do not adapt to the rules or traditions of the family system, those who were constantly seeking to revolutionize beliefs, going in contrast to roads marked by family traditions, those criticized, tried and even rejected, those, by General, they are called to release the tree of repetitive stories that frustrate entire generations.

The ‘Black Sheep’, those who do not adapt, those who scream rebel, repair, detoxify and create a new and blooming branch… countless unfulfilled desires, unfulfilled dreams, frustrated talents of our ancestors manifest themselves in their rebellion looking to take place.